You can configure vSphere HA to tolerate a specified number of host failures. With the Host Failures Cluster Tolerates admission control policy, vSphere HA ensures that a specified number of hosts can fail and sufficient resources remain in the cluster to fail over all the virtual machines from those hosts.
With the Host Failures Cluster Tolerates policy, vSphere HA performs admission control in the following way:

If your cluster contains any virtual machines that have much larger reservations than the others, they will distort slot size calculation. To avoid this, you can specify an upper bound for the CPU or memory component of the slot size by using the das.slotcpuinmhz or das.slotmeminmb advanced attributes, respectively. See “vSphere HA Advanced Attributes,” on page 30.

After the slot size is calculated, vSphere HA determines each host’s CPU and memory resources that are available for virtual machines. These amounts are those contained in the host’s root resource pool, not the total physical resources of the host. The resource data for a host that is used by vSphere HA can be found by using the vSphere Client to connect to the host directly, and then navigating to the Resource tab for the host. If all hosts in your cluster are the same, this data can be obtained by dividing the cluster-level figures by the number of hosts. Resources being used for virtualization purposes are not included. Only hosts that are connected, not in maintenance mode, and that have no vSphere HA errors are considered.

The maximum number of slots that each host can support is then determined. To do this, the host’s CPU resource amount is divided by the CPU component of the slot size and the result is rounded down. The same calculation is made for the host’s memory resource amount. These two numbers are compared and the smaller number is the number of slots that the host can support.

The Current Failover Capacity is computed by determining how many hosts (starting from the largest) can fail and still leave enough slots to satisfy the requirements of all powered-on virtual machines.
Advanced Runtime Info

When you select the Host Failures Cluster Tolerates admission control policy, the Advanced Runtime Info link appears in the vSphere HA section of the cluster’s Summary tab in the vSphere Client. Click this link to display the following information about the cluster:

The way that slot size is calculated and used with this admission control policy is shown in an example. Make the following assumptions about a cluster: 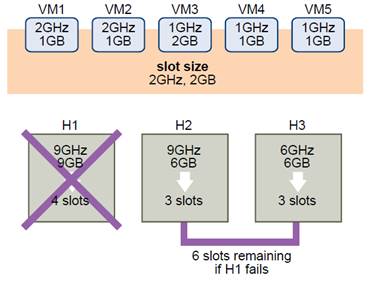 Therefore, the Current Failover Capacity is one. The cluster has one available slot (the six slots on H2 and H3 minus the five used slots).

Leave powered on (the default), Power off, and Shut down. You can customize this property for individual virtual machines.

The vSphere HA checklist contains requirements that you need to be aware of before creating and using a vSphere HA cluster.

Requirements for a vSphere HA Cluster

Review this list before setting up a vSphere HA cluster. For more information, follow the appropriate cross reference or see “Creating a vSphere HA Cluster,” on page 25.

The key to architecting a highly available computing environment is to eliminate single points of failure. With the potential of occurring anywhere in the environment, failures can affect both hardware and software. Building redundancy at vulnerable points helps reduce or eliminate downtime caused by [implied] hardware failures.

These include redundancies at the following layers:

Prior planning regarding hosts to be used in a cluster will provide the best results. Because it is not always possible to start with a greenfield environment, this section will discuss some of the considerations applicable to the hosts.

Overall vSphere availability starts with proper host selection. This includes items such as redundant power supplies, error-correcting memory, remote monitoring and notification, and so on. Consideration should also be given to removing single points of failure in host location. This includes distributing hosts across multiple racks or blade chassis to remove the ability for rack or chassis failure to impact an entire cluster.

When deploying a VMware HA cluster, it is a best practice to build the cluster out of identical server hardware.

Using identical hardware provides a number of key advantages, such as the following ones:

The overall size of a cluster is another important factor to consider. Smaller-sized clusters require a larger relative percentage of the available cluster resources to be set aside as reserve capacity to adequately handle failures.
Host Versioning

An ideal configuration is one where all the hosts contained within the cluster use the latest version of ESXi.

When adding a host to vSphere 5.0 clusters, it is always a best practice to upgrade the host to ESXi 5.0 and to avoid using clusters with mixed-host versions.

Upgrading hosts to ESXi 5.0 enables users to utilize features that were not supported for earlier host versions and to leverage capabilities that have been improved. A good example of this is the support added in vSphere 5.0 for management network partitions. This feature is supported only if the cluster contains only ESXi 5.0 hosts.

Mixed clusters are supported but not recommended because there are some differences in VMware HA performance between host versions, and these differences can introduce operational variances in a cluster.
Host Placement

In versions of vSphere prior to 5.0, the concept of primary and secondary hosts, with a limit of five primary hosts, was present. This construct was the focus of many best-practice recommendations. In vSphere High Availability 5.0, this construct has been eliminated. Instead, VMware HA now uses a master/slave relationship between the nodes of a cluster. Under normal operations, there will be a single host that takes on the role of the master. All other hosts are referred to as slave hosts. In the event of a failure of a host acting as a master, an election process is performed and a new master is selected.

The use of this new construct for HA eliminates concerns held previously regarding the following issues:

The following suggestions are best practices for configuring networking in general for improved availability:

To configure a network adaptor team for the management network, configure the vNICs in the vSwitch configuration for the ESXi host for active/standby configuration.
Requirements:

To maintain a constant connection between an ESXi host and its storage, ESXi supports multipathing, a technique that enables you to use more than one physical path to transfer data between the host and an external storage device.

In case of a failure of any element in the SAN network, such as an adapter, switch or cable, ESXi can move to another physical path that does not use the failed component. This process of path switching to avoid failed components is known as path failover.

Many options are available when configuring a vSphere High Availability environment. This flexibility enables users to leverage HA in a wide range of environments while accommodating particular requirements. In this section, we will discuss some of the key cluster configuration options and the recommended best practices for them.

vSphere Availability Guide, page 32
When vSphere HA or Fault Tolerance take action to maintain availability, for example, a virtual machine failover, you can be notified about such changes. Configure alarms in vCenter Server to be triggered when these actions occur, and have alerts, such as emails, sent to a specified set of administrators.

A valid cluster is one in which the admission control policy has not been violated.

A cluster enabled for vSphere HA becomes invalid (red) when the number of virtual machines powered on exceeds the failover requirements, that is, the current failover capacity is smaller than configured failover capacity. If admission control is disabled, clusters do not become invalid.

The cluster’s Summary tab in the vSphere Client displays a list of configuration issues for clusters. The list explains what has caused the cluster to become invalid or overcommitted (yellow).

DRS behavior is not affected if a cluster is red because of a vSphere HA issue.
Create a custom slot size configuration

vSphere Availability Guide, Page 17 and 28
If your cluster contains any virtual machines that have much larger reservations than the others, they will distort slot size calculation. To avoid this, you can specify an upper bound for the CPU or memory component of the slot size by using the das.slotcpuinmhz or das.slotmeminmb advanced attributes, respectively. See “vSphere HA Advanced Attributes,” on page 30.
vSphere HA Advanced Attributes

You can set advanced attributes that affect the behavior of your vSphere HA cluster.

NOTE If you change the value of any of the following advanced attributes, you must disable and then re-enable vSphere HA before your changes take effect.

Understand interactions between DRS and HA

When vSphere HA performs failover and restarts virtual machines on different hosts, its first priority is the immediate availability of all virtual machines. After the virtual machines have been restarted, those hosts on which they were powered on might be heavily loaded, while other hosts are comparatively lightly loaded.

In a cluster using DRS and vSphere HA with admission control turned on, virtual machines might not be evacuated from hosts entering maintenance mode. This behavior occurs because of the resources reserved for restarting virtual machines in the event of a failure. You must manually migrate the virtual machines off of the hosts using vMotion.

In some scenarios, vSphere HA might not be able to fail over virtual machines because of resource constraints.

This can occur for several reasons.

In such cases, vSphere HA can use DRS to try to adjust the cluster (for example, by bringing hosts out of standby mode or migrating virtual machines to defragment the cluster resources) so that HA can perform the failovers.

If you are using VM-Host affinity rules that are required, be aware that these rules cannot be violated. vSphere HA does not perform a failover if doing so would violate such a rule.
Analyze vSphere environment to determine appropriate HA admission control policy

Clusters can be heterogeneous in terms of virtual machine resource reservations and host total resource capacities. In a heterogeneous cluster, the Host Failures Cluster Tolerates policy can be too conservative because it only considers the largest virtual machine reservations when defining slot size and assumes the largest hosts fail when computing the Current Failover Capacity. The other two admission control policies are not affected by cluster heterogeneity.
NOTE vSphere HA includes the resource usage of Fault Tolerance Secondary VMs when it performs admission control calculations. For the Host Failures Cluster Tolerates policy, a Secondary VM is assigned a slot, and for the Percentage of Cluster Resources policy, the Secondary VM’s resource usage is accounted for when computing the usable capacity of the cluster.
Analyze performance metrics to calculate host failure requirements

vSphere Availability Guide
Even on the Cluster level is a Performance tab available. In the Overview mode, three views are available:

The Advanced View has a section on Cluster Services. Three metrics are available, from which two can be selected at a time:

Disclaimer.
The information in this article is provided “AS IS” with no warranties, and confers no rights. This article does not represent the thoughts, intentions, plans or strategies of my employer. It is solely my opinion.